The Story of David Cook and Kazu Murakami

Home / The Story of David Cook and Kazu Murakami 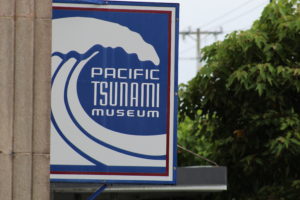 Naval ship LST 731 was enroute from Honolulu to San Francisco when the Captain was ordered to alter course to search for people who had been washed out to sea by the April 1, 1946 tsunami. As they passed along the coast of the Big Island, they made their first rescue — of a lady hanging onto a door.

But someone on the ship had spotted a boy on a life raft, dangerously close to the rocks. LST 731 turned around and headed back to try and pick him up. “The first pass they went by, the boat missed me, my heart sank,” the boy said. “Then I looked again. It came around a second time and they saved me.” Crew member David Cook said it was the last trip they could make because they were too close to shore. As the ship came alongside the boy’s raft, David went down a cargo net and hoisted the boy to safety. The boy was Kazu Murakami. Kazu said: “I passed out because I had to use all my strength to be saved. That was the last thing I remember. The next thing I knew, I was in a bunk bed.” The bunk bed was in a military hospital in Hilo, where Kazu was taken. His mother and sister passed him at the hospital because they did not recognize him due to an intense sunburn. Upon discharge the next day, Kazu took a bus home, where family members were planning his funeral.

The story would have ended there, had it not been for a letter that the Pacific Tsunami Museum (PTM) received in August 1998 from Mr. Louis Beago of Houston, Texas. He wrote: “On April 1, 1946, I was on an LST naval ship. We were underway from Honolulu to San Francisco and were ordered to look for survivors around Hilo. We picked up one lady off of some debris. We also picked up a boy…”

Mr. Beago included two old photos with his letter, one showing a boy in a rubber life raft and the other showing a sailor helping the boy out of the raft and onto a rope ladder over the ship’s side. The identities of the boy and his rescuer were unknown. The photos were displayed in the Museum.

On October 13, 1999, Glenn and Teresa Murakami of Thousand Oaks, California came into the Museum. Glenn mentioned that his father, a 15-year old boy at the time, had been washed out to sea at Laupahoehoe during the 1946 tsunami. His father had drifted overnight and was rescued the next day by a ship. Viewing the rescue photo, Glenn wondered if this was a picture of his father’s ordeal.

In an amazing coincidence, just eight days later, on October 21, 1999, David and Kathryn Cook visited the Museum. Mr. Cook mentioned that he had been aboard an LST naval ship that rescued two people, a woman and a boy, on April 2, 1946. When shown the photos, David recognized the school boy, Kazu Murakami. David vividly remembered the rescues of the woman and boy.

Amazingly, 53 years later and eight days apart, both family members had come into PTM. The Museum brought David and Kazu together for a “surprise reunion” on August 9-10, 2003. This reunion began the Museum’s annual tsunami story festival event.

Pictures in Which the Magic Lives

20 Most Strange Paintings in the World

We use cookies to ensure that we give you the best experience on our website. If you continue to use this site we will assume that you are happy with it.Ok