We believe that through education and awareness no one should ever again die in Hawai‘i due to a tsunami. 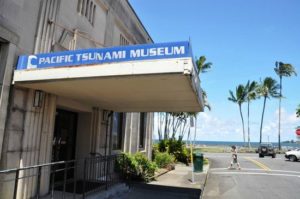 The goals of the Pacific Tsunami Museum (PTM) are to promote public tsunami education for the people of Hawai’i and visitors worldwide, preserve the social and cultural history of Hawai’i, and serve as a living memorial to those who lost their lives in past tsunami events.

The Pacific Basin has a long and dramatic history of devastation and rebirth caused by natural disasters. In general, most people are familiar with the destruction and loss of life caused by hurricanes, earthquakes and volcanoes. Unfortunately, the general public does not understand enough about tsunamis. Tsunamis have killed more people in the State of Hawai’i than all other natural disasters combined. Tsunamis are a fact of life in Hawai’i, especially in Hilo, which has suffered more damage and loss of life than any other area of the islands. From 1900 to 1964, a tsunami with runup exceeding one meter occurred an average of once every five years. On April 1, 1946 and May 23, 1960, Hilo experienced devastating tsunamis that completely reshaped the social and economic structure of the community.

Over the last 30 years, Hawai’i has experienced enormous growth in both resident and visitor populations, with extensive development in potential inundation areas. During this same time period very little destructive tsunami activity has occurred. Consequently, a whole generation of people has grown up without experiencing a major tsunami. Less than half our resident population and few visitors to Hawai’i have had any experience with tsunami hazards. Aging tsunami survivors, many of whom still reside within the State, are passing on. These tsunami survivors have invaluable stories to tell that can help document the cultural history and socio-economic development of Hawai’i. In the Hawaiian Islands, natural disasters, especially tsunamis, have played a significant role in determining where people live and conduct business. Currently, few tsunami education programs reach the general public or Hawai’i’s school children.

Description of the Organization

The Pacific Tsunami Museum (PTM) is a non-profit organization that works in collaboration with the International Tsunami Information Center (ITIC), the Pacific Tsunami Warning Center (PTWC), the University of Hawai’i (at both Hilo and Manoa), and State and County Civil Defense Agencies. It was incorporated in August 1994. The Internal Revenue Service has granted the Museum federal tax-exempt status retroactive to August 1994. PTM has a policy-making Board of Directors that includes representation from various sectors of the business community (see organizational structure). Many of the board members are either tsunami survivors or come from families that were directly affected by past tsunamis. PTM also has a Scientific Advisory Council that includes internationally recognized tsunami researchers and experts. PTM has received in-kind support from the local business community, as well as many hours of support from a dedicated volunteer work force.

The Pacific Tsunami Museum (PTM) provides residents and visitors to the State of Hawai’i with much-needed tsunami education programs. PTM features a series of in-house permanent exhibits that interpret tsunami phenomena, the Pacific Tsunami Warning System, the history of tsunamis in the Pacific Basin, and public safety measures for tsunami disasters. One of the factors that makes PTM unique is that it is a living monument to those who lost their lives in past tsunamis. By combining scientific information with actual testimony taken from oral histories of tsunami survivors, PTM keeps history alive in its exhibits and public programs. Oral history testimonies reinforce existing scientific information and provide a perspective that will make the tsunami experience “real” for the Museum visitor. The Museum provides a guidebook to the exhibits that is also available in six foreign languages.

We use cookies to ensure that we give you the best experience on our website. If you continue to use this site we will assume that you are happy with it.Ok